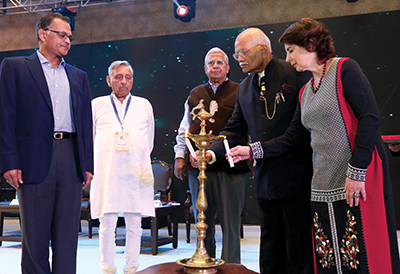 If success doesn’t take hold of your brain and heart, you will remain closer to God
14:27 pm

I am fortunate to share the dais with Pranab Mukherjee. I have spent a lot of time with him and have also learnt a lot from him.

Spirituality unfolds humanity. Be it in the Quran or in the Gita, the underlying message is that God is omnipotent and infinite. God has given us this body along with heart, brain, and soul. Along with these, he has also has given four elements – lust, anger, greed, and desire. These elements are always within us but they must be limited and controlled.

If success does not capture and distort your brain and heart, you will remain close to God. That can be said for the Kanoria family. I know the family for long and there has been no change in their attitude.

Those who don’t understand this philosophy are supposed to be capitalists. The conflict within capitalism gave birth to leftist ideas. The conflict within capitalism as well as in leftism brings distortion to society and that hurts individualism. The US has made capitalism popular, and so its greed and desire have to be paid back by the other countries. 42% aluminum, 44% coal, 33% copper, 28% iron, 20% natural gas, and 24% tin has been destroyed by America for its economic progress. The US sets burning example of the failure of capitalism. Leftism too failed in Russia and the eastern European countries.

India’s philosophy and spiritualism is the third option and states Vasudhaiva Kutumbakam – and Tamosoma Jyotirgamaya – to enlighten life through knowledge, wisdom and spirituality. Let money become a way to progress and and growth for humanity. But money is not the only way and I am glad that Srei has understood this and gave importance to the Indian philosophy. I want to congratulate the Kanoria family for that.